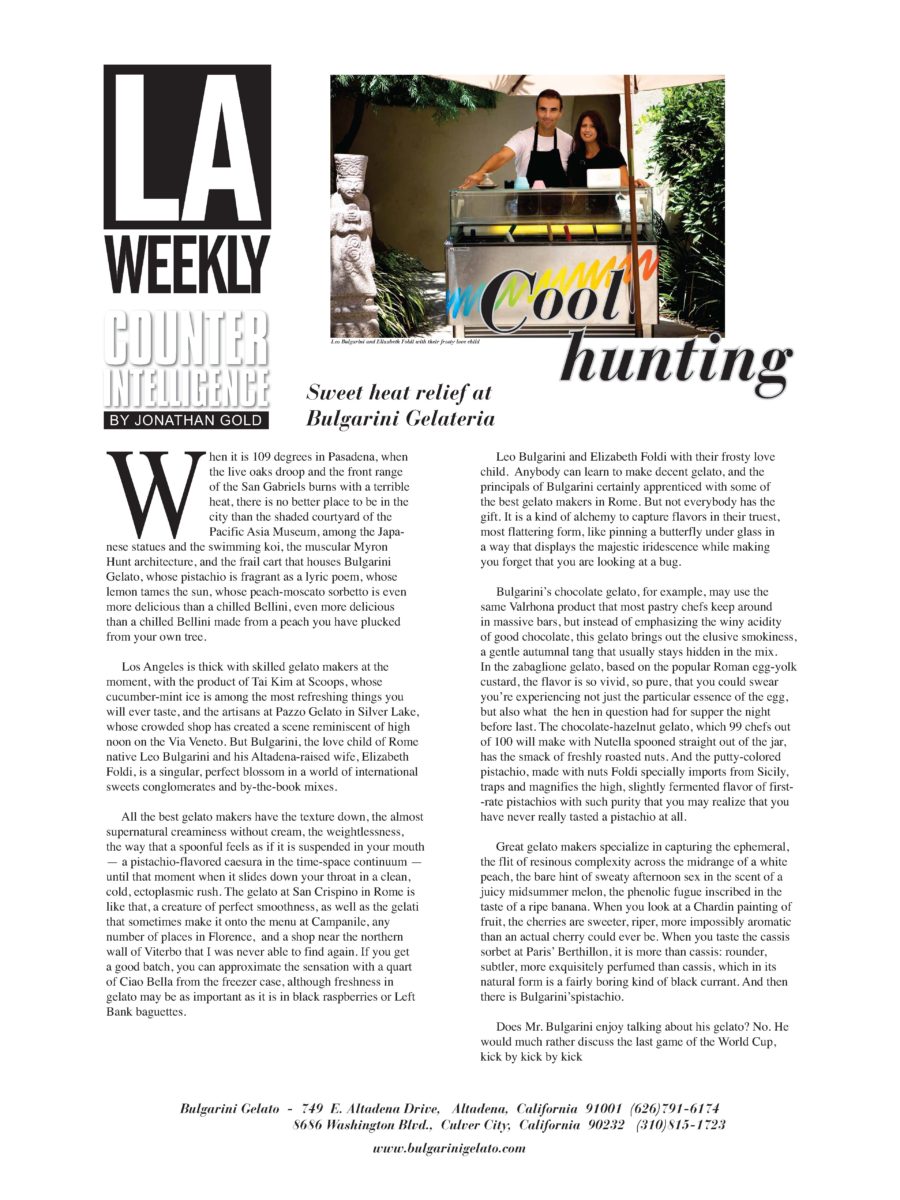 When it is 109 degrees in Pasadena, when the live oaks droop and the front range of the San Gabriels burns with a terrible heat, there is no better place to be in the city than the shaded courtyard of the Pacific Asia Museum, among the Japanese statues and the swimming koi, the muscular Myron Hunt architecture, and the frail cart that houses Bulgarini Gelato, whose pistachio is fragrant as a lyric poem, whose lemon tames the sun, whose peach-moscato sorbetto is even more delicious than a chilled Bellini, even more delicious than a chilled Bellini made from a peach you have plucked from your own tree.

Los Angeles is thick with skilled gelato makers at the moment, with the product of Tai Kim atScoops, whose cucumber-mint ice is among the most refreshing things you will ever taste, and the artisans at Pazzo Gelato in Silver Lake, whose crowded shop has created a scene reminiscent of high noon on the Via Veneto. But Bulgarini, the love child of Rome native Leo Bulgarini and his Altadena-raised wife, Elizabeth Foldi, is a singular, perfect blossom in a world of international sweets conglomerates and by-the-book mixes.

All the best gelato makers have the texture down, the almost supernatural creaminess without cream, the weightlessness, the way that a spoonful feels as if it is suspended in your mouth — a pistachio-flavored caesura in the time-space continuum — until that moment when it slides down your throat in a clean, cold, ectoplasmic rush. The gelato at San Crispino in Rome is like that, a creature of perfect smoothness, as well as the gelati that sometimes make it onto the menu at Campanile, any number of places in Florence, and a shop near the northern wall of Viterbo that I was never able to find again. If you get a good batch, you can approximate the sensation with a quart of Ciao Bella from the freezer case, although freshness in gelato may be as important as it is in black raspberries or Left Bank baguettes.

Anybody can learn to make decent gelato, and the principals of Bulgarini certainly apprenticed with some of the best gelato makers in Rome. But not everybody has the gift. It is a kind of alchemy to capture flavors in their truest, most flattering form, like pinning a butterfly under glass in a way that displays the majestic iridescence while making you forget that you are looking at a bug.

Bulgarini’s chocolate gelato, for example, may use the same Valrhona product that most pastry chefs keep around in massive bars, but instead of emphasizing the winy acidity of good chocolate, this gelato brings out the elusive smokiness, a gentle autumnal tang that usually stays hidden in the mix. In the zabaglione gelato, based on the popular Roman egg-yolk custard, the flavor is so vivid, so pure, that you could swear you’re experiencing not just the particular essence of the egg, but also what the hen in question had for supper the night before last. The chocolate-hazelnut gelato, which 99 chefs out of 100 will make with Nutella spooned straight out of the jar, has the smack of freshly roasted nuts. And the putty-colored pistachio, made with nuts Foldi specially imports from Sicily, traps and magnifies the high, slightly fermented flavor of first-rate pistachios with such purity that you may realize that you have never really tasted a pistachio at all.

Great gelato makers specialize in capturing the ephemeral, the flit of resinous complexity across the midrange of a white peach, the bare hint of sweaty afternoon sex in the scent of a juicy midsummer melon, the phenolic fugue inscribed in the taste of a ripe banana. When you look at a Chardin painting of fruit, the cherries are sweeter, riper, more impossibly aromatic than an actual cherry could ever be. When you taste the cassis sorbet at Paris’ Berthillon, it is more than cassis: rounder, subtler, more exquisitely perfumed than cassis, which in its natural form is a fairly boring kind of black currant. And then there is Bulgarini’s pistachio.

Does Mr. Bulgarini enjoy talking about his gelato? No. He would much rather discuss the last game of the World Cup, kick by kick by kick.