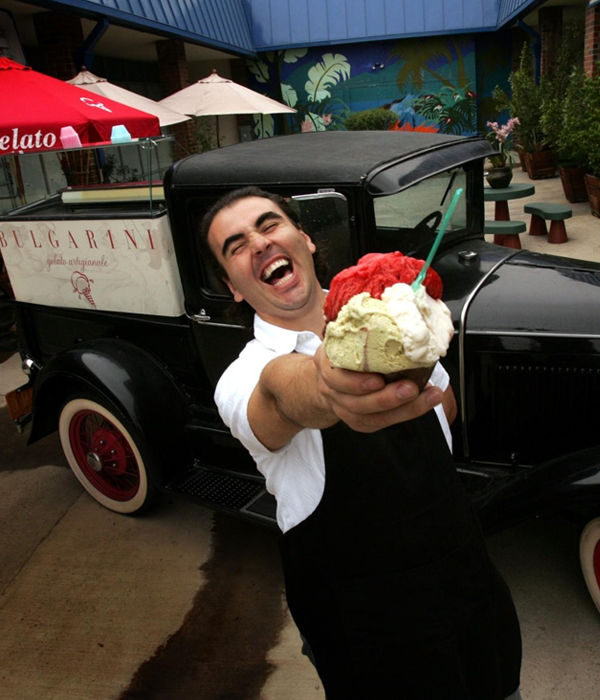 Sins of gluttony “Leo Bulgarini, transplanted to the United States since 1989: his ice creams are a Los Angeles delicacy

THE ICE CREAM MAKER THAT HAS CONQUERED HOLLYWOOD

The “Roman Taste” that homegrown sense for authentic flavors – conquers Hollywood. Thanks to the artisan ice cream by Leo Bulgarini: 41 years old, former welder, transplanted to the USA since 1989. From via di Grottarossa to Altadena, a small community about twenty kilometers from Los Angeles, passing through Trinacria. – I studied 4 months with the Sicilian masters – says Mr. Ice – cream – to make one hundred percent natural products. A somewhat utopian challenge, in contrast to the boom in semi-finished products: “In Rome, only the sei Gracchi ice cream parlor, assures the purist, uses organic raw materials, grinds walnuts without resorting to ready-made powders. It will be for the aromas of other times, it will be for the slow philosophy, the Californians love pistachio and stracciatella “Italian style”. Thanks to word of mouth and lucky encounters: a bit like in the comedy “Mystic Pizza”, where the snobbish critic of a gastronomic guide gives in to the delicious dishes served by Julia Roberts. Yes, because the Bulgarini phenomenon was launched in 2006 by an undercover reporter from the German weekly “Der Spiegel”: It happened by chance in an ice cream parlor – recalls the star of cones and sorbets – without introducing himself. Who would have imagined it? Friends warned me about the review! – So much so: the echo immediately spread, with dozens of articles in the US press. The latest applause from “La Weekly” which included it in the list of 99 places not to be missed. Unexpected success, for an outsider torn between iron sculpture and filmmaking. “When I emigrated I had other projects – he confesses -, I dreamed of becoming a director“. Galeotta the sweet soul of his wife: “We were following a pastry course in France and there I came up with the idea of ​​rediscovering the ice cream of the past, which was now disappearing even in Italy“. All “vintage” from the Carpigiani machine that runs in the old way, “vertically”, to the ingredients: pistachios from Bronte, oranges from Ribera, Sorrento lemons, Marsala. And sheep’s milk ricotta from Lazio, sent by plane from Fiumicino: “The best! And exquisite in semifreddo with pears and chocolate flakes “. Bulgarini loves testing new ensembles. Like him very much, even in restaurants. Californian fruit (peaches, prickly pears, strawberry) is ideal for sorbets, while the bold mix with rice milk and seaweed turns to fusion: paired with sushi and in a gourmand version. Among his fans there is certainly no shortage of celebrities. The most loyal? “Tim Roth and John C. Reilly often stop for a stop and go!” Thanks to his culinary talent, appreciated not only by West Coast foodies: “In addition to promoting the United States as a destination, underlines Sandro Saccoccio, president of Visit Usa Italia, we value Italian excellence. Bulgarini is at the top in gastronomy and is in line with our campaign to introduce quality certification in the tourist offer to North America.