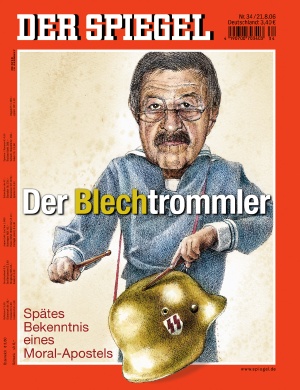 Global Village: How two immigrants want to save America – with vanilla, pistachio and sensuality
Leo now takes a mango from the stack, he holds it with both hands like one holds a baby, he leans forward, sunk, stares at the fruit as if he wanted to look through the peel, turns it, sniffs, weighs the mango in hands, she feels, nods. Exhales audibly. Put them aside. “Va bene,” it’s okay. Quiet voice.

Leo, long-haired, casual, born in Rome, trained blacksmith, then metal sculptor, then farmer, upper class origin, then to America, just because it was romantic and he wanted to prove himself, in Los Angeles dishwasher, waiter, pizza maker, manager, Bouncer, bearded, thoughtful and equipped with an Adriano Celentano voice and biceps that arch like sugar melons when he lifts the heavy boxes – Leo already has the next mango. Sniff, feel, stare, and so the morning goes by, after the mangoes the strawberries, then the pistachios, three sacks, the eggs.

Then the hazelnuts. The chocolate.

Leo Bulgarini, 37 years old, in the USA for 16 years, has had new business cards printed. He had his name put with bold flourishes: Gelato Artigianale, which can be freely translated as “ice cream art”.

This is his mission. Because Leo wants to save America.

He wants to save America by creating the best ice cream in the country together with his wife Lisa; They want to write a success story, at the end of which the Americans will have learned something infinitely important about taste and sensuality; while they, Leo and Lisa, have gotten rich and will go back to Rome and sit on a balcony in the evening, look at the Campo de ‘Fiori and raise their red wine glasses: To you, mio ​​Amore, and do you remember back when it all began in that little museum in Pasadena?

The success story, if it becomes one, starts here, an hour’s drive northeast of downtown Los Angeles, California.

The Pacific Asia Museum is located on Los Robles Avenue, four small halls, in which hardly a visitor ever gets lost, with stone Buddhas from Angkor, 11th century, and Japanese masks from the Edo period – and when you’ve seen all of that, you step into an inner courtyard shaded by ginkgo trees. An espresso wouldn’t be bad now. But there is no café. But a kitchen. And that’s where Leo works. And beckons you over.

Here is his training camp, his laboratory, and if customers come, they are test subjects.
You give a $ 20 note for three servings and get insignificant change back, and while you’re still doing the math and wondering whether you should complain in any way, you’ve already tried it, and Leo is watching out of the corner of his eye.

Gosh, Leo, how are you going to do this?

A lot of work, he says, the best ingredients, and total dedication doesn’t hurt either.
When Leo and Lisa met three years ago, they decided to make something special out of their life. Lisa is the daughter of a Hungarian revolutionary who emigrated to the USA after the uprising in 1956 and started over, and a Chinese woman. Lisa studied music, law, and biology and was looking for the man of her life and the special task. And then she met Leo. He loved her and talked about this gelato idea that he had always had.

They scraped together their savings and traveled for two years through northern Italy, Switzerland and Sicily, they ate in hundreds of ice cream parlors, interviewed dozens of ice cream makers, took lessons in Catania for months, filled up their notebooks, came back. Take out a loan, $ 50,000. Rented in the museum courtyard, found a shop on Lake Avenue, their own ice cream parlor soon to be opened, their missionary work.

“You can go to the supermarket,” says Leo, “buy horrific as-if-ice cream for two and a half dollars a kilo – or you can add a little more, buy a smaller portion and experience something with it. And remember, come with it Happiness, the rest of your life to taste. “

They prepared their coup for three years. Their hazelnuts come from Piedmont, the pistachios from Sicily, the vanilla from organic farming in Madagascar, the choice of chocolate was difficult: They experimented with 40 varieties and opted for Valhrona, with a little van Houten. And at least as important is what they don’t use, everything that is usually written on the back of ice packs: emulsifiers, stabilizers, fruit puree concentrate, instead the best fruit you can get in California – Leo drives to the peaches, strawberries, mangoes a plantation north of Santa Barbara, seven hour freeway, three times a week. “But you can tell,” he says.

“Taste,” says Lisa, “is a statement, almost a revolution, almost political.”
“Our attitude towards food reflects everything”, says Leo, “the relationship to community, tradition, nature, to ourselves.”

Your ice cream will be expensive but not priceless; a revolution for everyone, in a cup. You are optimistic – and by the way, others also believe in the success of the two ice saints. Leo talks about half a dozen franchise offers. “When Americans smell money, they get overzealous,” he says. “I wait until we deliver the desserts for the parties of the stars and billionaires – then I can choose my partners. And if it doesn’t work, at least we tried.” He smiles.